Panorama > Panorama Server > Shared Databases
Automatic Record Numbering in a Shared Database
Many databases applications require that each record contain a unique number that can be used to identify the record. Common examples include invoice numbers, batch ID’s, employee numbers, etc. Panorama can automatically assign a unique number to each new record as it is created, even if several people are using the database simultaneously over a network.

Setting up automatic record numbering should usually be done before you convert the database from single user to sharable. First set up the field that will contain the automatic record number. This field must be a numeric field. To specify that this field should contain a unique record number, the default should be + . Do not specify any increment value, just use a single + character. 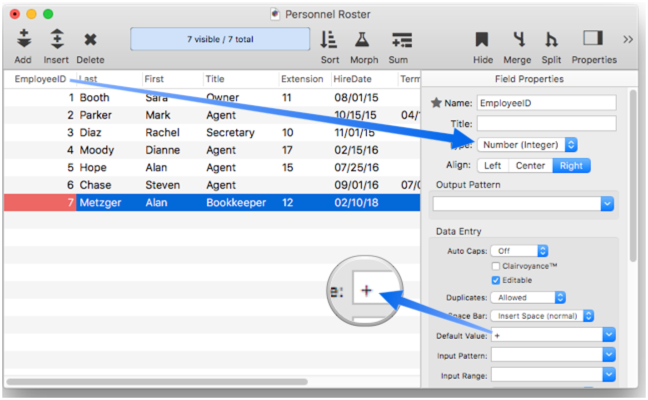 Once the default is set up, share the database to the server (see Creating a Shared Database.

To illustrate how automatic numbering works, let’s assume that Bob Blue and Rudy Red have been hired to do some data entry on this personnel roster. The database starts out looking like this on both Bob and Rudy’s computers:

The first field, EmployeeID, has been set for automatic numbering. So far the employees have been assigned numbers from 1 to 7. Now Bob starts by adding a new record to the database. As you can see, this adds employee number 8 to the database. This screenshot shows what Bob sees as this point.

Before Bob can even enter any data, Rudy gets to work and adds a record himself. The server knows that 8 has already been used, so this is employee number 9. This screenshot shows what Rudy sees as this point.

Meanwhile Bob has finished entering the first record and adds another. This is employee number 10.

As they are adding new records, Bob and Rudy will not see the records added by each other (or anyone else). If they want to see all of the new records, they can simply choose Synchronize Data from the File menu, and the records entered by other users will appear. 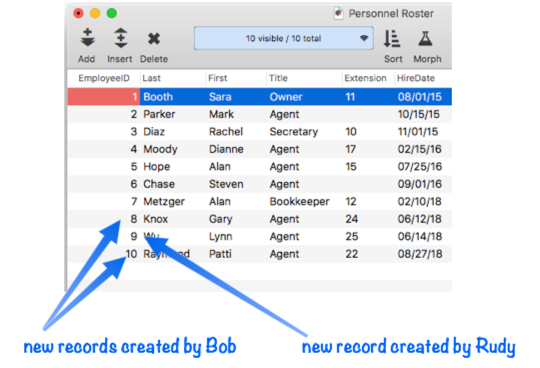 The automatic record number normally increments by one each time a new record is added, but you can manually change the record number counter at any time using the Database Options dialog (in the File menu). 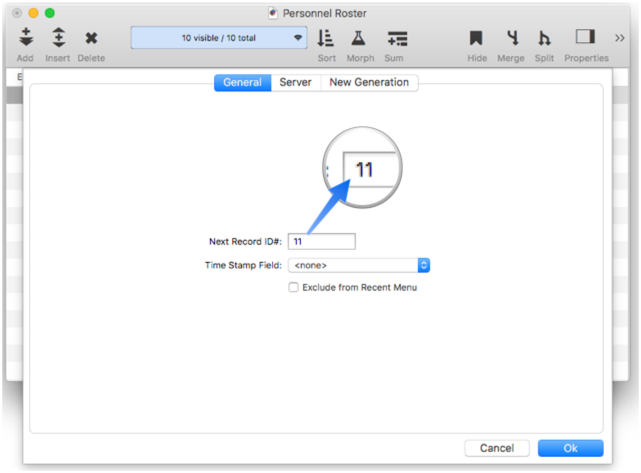 This change takes place immediately, so the next time a record is added, the employee number will be 50. 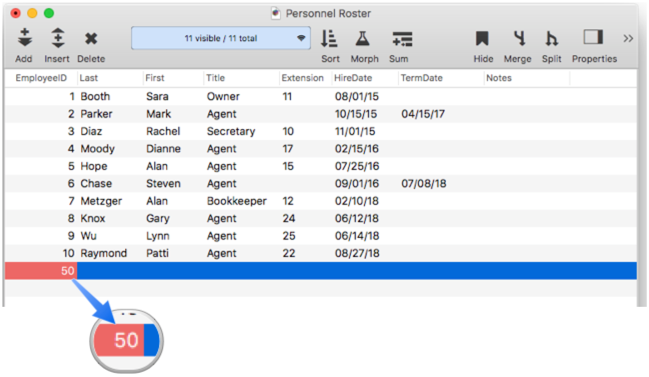 Keep in mind that this is the next record added anywhere on the network. If someone else adds a record before you do, you’ll see 51, 52, or a higher number on your computer.

Accessing the Next Record Number in a Procedure

Keep in mind that since this is a multi-user system someone else may use that number before you get a chance to, even if the addrecord statement is the next statement after the GetAutoNumber statement.

This is exactly the same as setting the number with the Database Options dialog sheet.