Panorama > Database > Fields
Splitting a Field
Sometimes you’ll need to take an existing field that already has data in it and split it apart. This can be accomplished with the Split Field dialog (accessed from the tool bar or the Fields menu). To use this dialog you choose how the field should be split, type in names for the new fields, and press the Split button. In this example a combined Name field is split into separate First and Last fields.

Panorama can split a field at any of three dozen different characters or symbols, or at a specific character position. For example, an e-mail address can be split into user name and ISP by splitting at the @ symbol.

You don’t have to split at the first instance of a character - you can choose any of the first or last nine instances. In this example the split occurs after the third / symbol.

If you choose to split at a character position instead of at a character or symbol, the pop-up menu expands to allow you to select up to the first 50 positions. In this example a phone number is split into separate area codes and local numbers by splitting after the sixth character (this is just one way to split a phone number, another method will be described later).

Sometimes after you split a field there will be extra spaces or punctuation that needs to be removed. For example, suppose you want to split a field containing Last, First names into separate last and first names. This can easily be done by splitting on the comma, but there’s a problem — an extra space at the beginning of each first name. To remove this extra space check the Strip surrounding Blanks checkbox.

Sometimes you’ll need to strip off punctuation in addition to or instead of blanks. In this example the dialog is splitting a phone number into separate area codes and local numbers. To eliminate the ( and ) around the area code check the Strip Surrounding Punctuation option. 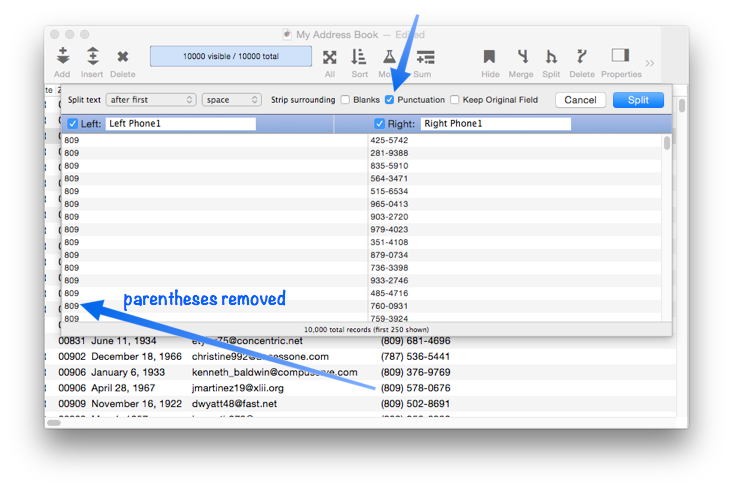 If necessary, you can always perform additional cleanup with the Morph Field Dialog after the fields have been split.

Usually splitting involves turning one field into two, but sometimes you just want to keep one part of the original field and discard the rest. To do that just uncheck the side of split that you don’t want.

Sometimes a useful option is to do a partial split combined with keeping the original field. For example, you could split an email field to create a separate ISP field, while keeping the email field instact. 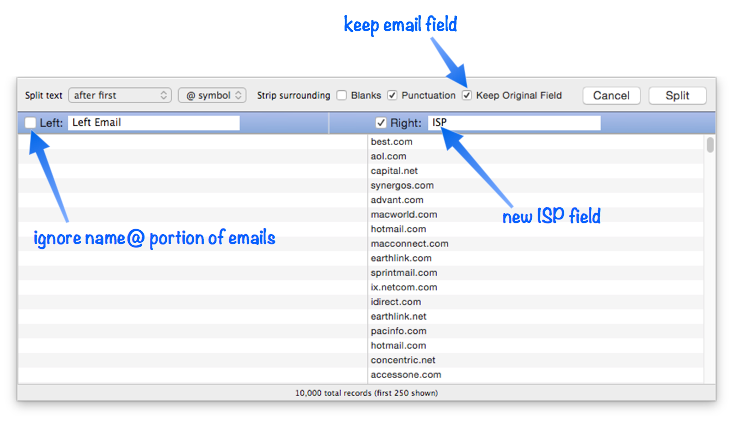 It’s possible, though unusual, to split numeric or date fields. The number or date is converted to text before being split, and the resulting fields are always text fields. You may need to set the output pattern for the date or number field before you split it to get the format you want.